Explore a series of impossible, cyclopean mazes and fight ancient alien beings in this retro first-person shooter. Paradox Vector is inspired by the old-school vector graphics games of the early 1980's and the non-Euclidean geometry of M.C. Escher.
Buy Paradox Vector:
Steam ... Itch.io ... Gamejolt
Download the Press-kit for Paradox Vector
“Lured me in like a moth to a Tron convention ... this is a very smart first-person shooter.”
Buried Treasure

“Competent and polished ... What struck me was how trippy the level design can be.”
The Gamer

“The spindly-legged child of DOOM and TRON, Paradox Vector sees you blasting your way through a range of wireframe-based levels, fending off space spiders, Definitely Not Daleks and other monstrosities.”
GameSpew 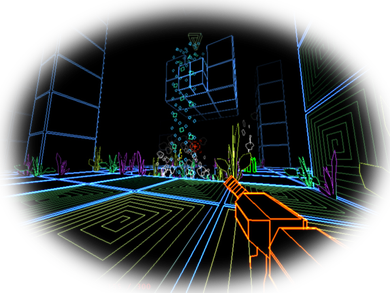 Vector Graphics
Paradox Vector imagines if vector graphics were still popular when the first-person shooter genre got started. The old-school shooters like Doom, Quake and Wolfenstein 3D arrived well after vector graphics had been all but forgotten. In this open-world game, you can see a different kind of retro shooter, one that never actually existed.

Inspired by arcade games from the early 1980s like Tailgunner, Battlezone, and even the original Star Wars game, Paradox Vector takes this abandoned style, and brings it up to date.

Impossible Geometry
The impossible art of M.C. Escher had a big influence on Paradox Vector. This is not a puzzle game, but an action game set in a puzzling environment. Hallways appear to go one way but actually go another, enemies may attack from angles you might not expect, and navigating the levels may require you to think outside of the box.

Don't think it's going to be easy though! The ancient alien stronghold you are exploring is not abandoned. Robotic guards, Deadly Squid-Spiders, Flying Jellyfish and even the Old Ones themselves will make your life a living hell if you are not careful! 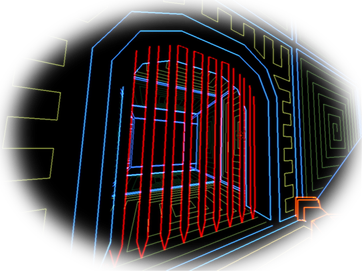 Open World
Paradox Vector does not limit players to a simple series of levels, but allows you to explore an open environment, retracing steps as needed. Some weapons and items will allow you to unlock secrets and upgrades, thus rewarding those who are curious and persistent. Don't let the minimalistic graphics fool you, there is a lot to be discovered in this puzzling and challenging adventure.